If you're looking to become a TEFL teacher in Barcelona you might want to know when the best time to go there is and what the pros and cons are of teaching in Barcelona.

English teaching tends to have a annual cycle as many Spaniards and Catalans sign up for a few hours of English for the winter period (both in companies and in schools) and classes can run until Christmas or even until Spring. And the people who don't get round to signing up in the autumn, will then place their intention to learn English on to their New Years resolution list and may start classes in January and February and the classes will then run until Easter. After Easter it slows down and, from July until around the end of August there will be less work available.  It therefore makes sense to start looking in September/October when the summer if over.

- A lot of people (locals and foreigners) want to learn English which means there is an endless supply of students and being an ESL teacher is probably the easiest and most popular way of earning a decent wage.

- Part time hours for (almost) a full time wage. The money you will earn as a teacher surpasses the minimum wage by a long shot and whether or not you're working privately or for a school/company, you will more than likely be earning as much as an office worker for doing a lot less hours.

- Meeting new people who are usually from the same course as you if you were to take your teacher training course in Barcelona; there were several other people on my course who I am still friends with.

- A vast majority of the locals in Barcelona do not (surprisingly) speak a word of English. But, because there is a growing recognition that English is the language of the future for tourism, travel and business, so many are eager to learn; a lot of companies will even pay for their staff to have English lessons.

- Lots of holidays! One to two months over the summer,  a couple of weeks at Christmas a week for Easter. As well as quite a few bank holidays that you won't get anywhere else in Spain (the Catalans like their holidays) throughout the year.

- Learning another language (if you don't already speak Spanish). There are a lot of private teachers and schools that you can go to in order to learn. If you can't afford to pay for lessons,you could always enroll in a 'swap' scheme whereby you teach English in exchange for learning Spanish. And, if you don't want to do that, you will for sure pick it up as you go along, particularly if you find good friends among your students that you can hang out with.

- The hours are slightly all over the place (especially with in-company classes) as you won't be teaching block hours. So, even though you may only be working for 5-6 hours a day, you will often start at 9 am, and finish as late as 9 pm,  with random breaks throughout the day.

- Erratic wages due to not having set hours each week as you would with an office job. However, you will earn more once you've gained experience and you could always do private lessons in your spare time to bump up your money. The good thing about Barcelona is that you can have a fairly good quality of life with very little money, so if you love teaching, then the money is fine.

- Finding a permanent position with a good contract. Permanent positions are hard to come by as the work is usually seasonal and there are always new teachers coming onto the scene willing to work for less money. However, if you are good at what you do there's no reason for the company or school to keep you on and sign another contract with you once your term is over.

- Not being a European citizen. Many schools and institutions won't employ you if you require a work permit as it means a lot of paperwork and wading through red tape for them. So, if you are not an EU citizen, it's likely you will find it difficult to get a work permit. This doesn't mean you won't ever be able to find work in Barcelona, it just means you will have a challenge on your hands but one that isn't impossible to conquer - you could, for example, try some schools outside Barcelona or start by offering private classes.

- Long holidays. Although this is down as a pro, it can also be a negative point because (most) academies don't pay you for the time you are not working. So, if you haven't managed to save up enough money to live off while you're enjoying your holiday, you're not going to enjoy it very much! Having said that, you could be lucky enough to find a summer camp job with children for a month, either in Spain, or other countries. And some schools run intensive courses throughout the summer too, so there are other options available.

So, there you have the pros and cons and if you think the pros outweigh the cons, why not arrange an interview with Oxbridge TEFL today and make the first move in procuring a teaching job in Barcelona, whether it's just for the summer or permanently.

May 2015
Teaching in Barcelona
by Elena Riches
If you're looking to become a TEFL teacher in Barcelona you might want to know when the best time to go there is and what the pros and cons are of teaching in Barcelona. English teaching tends to have a annual cycle as many Spaniards and Catalans sign up fo...
Read More...

May 2015
Learning Styles
by Elena Riches
In one of my blogs I wrote about teaching styles in 'The Art of Teaching English', today I'm going to write about learning styles. As diffe...
Read More...

May 2015
Approach to Successful ESP Classes
by Elena Riches
How does English for specific purposes (ESP) differ from English as a second language (ESL)? In ESP classes the student has a purpose to learn English whereas with ESL they simply want to learn English to be able to converse with English speakers. What kind of people want to learn ESP? ESP students are u...
Read More...

May 2015
Using Authentic Materials In The Classroom
by Elena Riches
Following on from the previous two blog posts, which you can read here and ...
Read More...

April 2015
Classroom atmosphere
by Elena Riches
In the blog I wrote before this one (which you can read about, here) I talked about how student attitude is an important factor of success in learning a foreign language and went on to talk abo...
Read More...

April 2015
Teacher/Student Relationship
by Elena Riches
An important factor of success in learning a foreign language is the student's attitude towards it. A student who considers the learning of English as a positive and rewarding experience is less likely to suffer from foreign language anxiety. However, their attitude is very often influenced by the following: a) teacher/student relationship...
Read More... 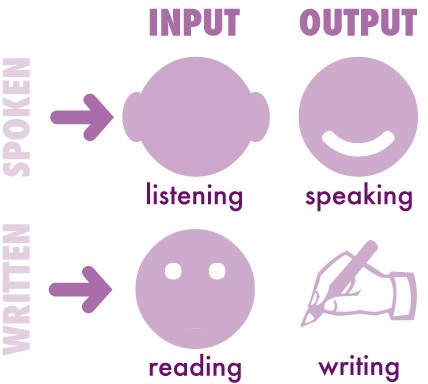 April 2015
Extensive and intensive ESL activities: Gist for the fun of it
by Vincent Chieppa
...
Read More...